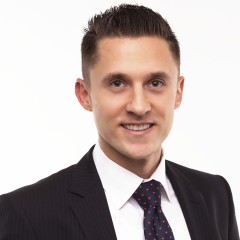 Dmytro Biryuk is the founder and managing attorney of Biryuk Law.

Dmytro is a proficient international lawyer trained and qualified in both the United States and Europe.

He has been practicing business law for over 15 years.

Before establishing Biryuk Law, Dmytro had a distinctive track record with leading international law and consulting firms. It, in particular, includes (in reverse chronological order):

Furthermore, Dmytro is an international adviser of the European Bank for Reconstruction and Development (EBRD).

Dmytro focuses on business law, particularly corporate/M&A, investment, and drone law in the US. He also extensively practiced finance, real estate, construction, commercial, and other business law matters in Ukraine.

Dmytro is a member of the following professional organizations:

Awarded the Edmund S. Muskie graduate fellowship, Dmytro received a master of laws (LLM) degree in American law for foreign lawyers from the Saint Louis University School of Law, MO, US, in 2007.

At the same time, Dmytro was twice admitted to the LLM program by the University of Cambridge in England, UK.

Dmytro also graduated from the Kyiv National Economics University, where he earned his bachelor’s and master’s degrees in law in 2003 and 2004, respectively.

Additionally, Dmytro completed the Freedom Support Act undergraduate exchange program in international studies at the University of Nebraska at Omaha, NE, US, in 2002.

As a result of his academic achievements, Dmytro received:

Need a proof of these accomplishments?

Then, see some of Dmytro’s credentials.

Notably, Super Lawyers (Thomson Reuters) has selected Dmytro to Rising Stars for 2021 and 2022, as shown here:

Only 2.5% of attorneys in New York Metro receive this distinction. Selection to the Rising Stars list provides third-party validation…

Working with Dmytro, you leverage:

Just as Dmytro easily switched from PC to Mac (for top performance, reliability, and security), he can swiftly turn your business into the right legal path.